Established high tensile strength steel (HTSS) processing technology prior to other companies and expanded it to overseas factories.
The new Kanda plant became the mother factory of the Topre Group.

"Established in Tokyo in 1935 as Tokyo Press Kogyo Co., Ltd. In July 1960, a new factory was built in Sagamihara City, Kanagawa Prefecture. Later, added the domestic factories in Hiroshima, Tochigi, Gifu, Kyushu, Saitama, Mie, and overseas factories in the United States, China, Thailand, Mexico, and India one after another. The company has a wide range of businesses, including automobile stamping parts, constant temperature logistic products, air conditioner related products and electronic device related products. Established Topre Kyushu Co., Ltd. in Kurume, Fukuoka Prefecture in April 2001 with the aim of supplying products to car manufacturers in the Kyushu area. In 2015, the “Technology Center”, which is the largest mold factory in Kyushu, was added, and local car manufacturers have shown the interest of Topre expansion in the region.
In addition, Kanda Factory, which was newly built in January 2019, is equipped with the latest equipment and is positioned as a mother factory that supports the global expansion of the Topre Group." 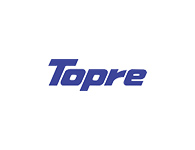 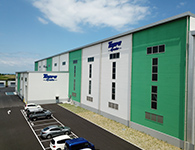 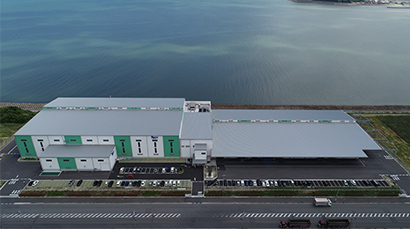 Mr.Yukawa, president of Topre Kyushu said in the interview as follows:
“Japan's automobile production had declined significantly due to the shift to overseas production and a decline in domestic sales after peaking in 1990 . Under such circumstances, the automobile industry in Japan has been expanding its production bases in the Kyushu region in order to strengthen its competitiveness (In 1992, Toyota Motor built up the new factory, Nissan Motor expanded the factory, and in 2004 followed by Daihatsu .) . Against this background, We also established Topre Kyushu in Kurume City, Fukuoka Prefecture by relocating the existing Hiroshima office in 2001, while in overseas, from the experience having provided High Tensile Strength Steel (HTSS) products with automobile bumpers in Japan for many years, and having made some achievement in the activities of adopting HTSS as body frame parts, we have expected the needs for higher body strength and lighter weight. We started to respond to new requirement by IIHS (Insurance Institute for Highway Safety) in the United States in 1995, promoting the superiority of the HTTS sheet and its processing technology, and then we established the factory in Alabama,United States in 2001.
At that time, in North America, the HTSS was not still well known, and we often held workshops on materials before the sales activity. Thanks to that, the HTSS market spread rapidly, and we won many HTSS product orders, and now have four stamping plants in North America.
In addition, the presence of blast furnace manufacturers is significant for this activity. We have requested processability for developing materials that are not generalized in the market, requested steel grade development for new needs, promoted product development, and finally put them on the market. These activities have been promoted not only in Japan but also with blast furnace manufacturers in the United States and China. "

A major specialty of Topre is HTSS processing technology. Topre Kyushu has established processing of super high tensile material with strength of 120kgf / mm2 (1180Mpa). And has succeeded in the new challenges, so called “Hot Stamping Method (Hot Press)” for further weight reduction and higher strength. A steel plate heated to about 900 ° C is quenched (heat treated) at the same time as pressing to achieve dramatic improvements in strength. This enabled mass production of 150kgf / mm2 (1470MPa) class strength products. Furthermore, Topre is the first Japanese component manufacturer to introduce the technology to the factory in U.S.A.. For example, in cold forming of 150kgf / mm2 (1470MPa), since the yield stress of the material is high, residual stress tends to remain after forming, and this may cause the material to crack (delayed fracture) after several years. On the other hand, the hot stamping method is characterized by the fact that a hot steel sheet is formed and then cooled, so that residual stress is unlikely to remain. At present, it can handle up to 180kgf / mm2 (1764Mpa) class.

Unlike the conventional tandem coil feeder line, the coil line delivered to the Kanda Plant was a space-saving Straightener/Feeder. Mr. Ishii, director and plant manager told about this process.
“As we proceeded with the planning of Kanda new plant, there was a concept of space-saving equipment layout. There were many achievements in adopting a tandem system at other bases of the Topre group, but in the case of Straightener/Feeder, there was an opinion that productivity was inferior. While I went ahead with the survey, I heard that AMADA PRESS SYSTEM Straightener/Feeder had overcome their weaknesses considerably. ”
“Surely, in the case of Straightener/Feeder, compared with tandem type, the tracking performance of SPM may be inferior depending on the feed length, but in our production, it was not so inferior. I believe that the realization of the benefits of space saving has solved a major issue."

President Yukawa said, “Within the company, I can hear the voice of in-house manufacturing up to a certain level of production equipment, but I think it is more important to leave it to professional supplier and concentrate on our main business than to stick to in-house manufacturing of production equipment.”
“We should struggle with the“ manufacturing ”part of our products, and it enables us to focus on what our customers can only buy from Topre. This time, we adopted AMADA PRESS SYSTEM Straightener/Feeder because it has already proven the performance in tandem coil lines within the company and has a high level of technology and a nationwide service system."
And then, the plant manager Ishii added, “AMADA PRESS SYSTEM shall try for new initiatives and the demands of Topre. There is certainly the risk of challenges. Sometimes it may cause the failure. However AMADA PRESS SYSTEM shall find the cause, make feedback on the ground, and solve the problem positively. "
This time, AMADA PRESS SYSTEM received a new request for automation including coil band cutting from Topre. The manual band cutting has been the conventional process at the press work site, and Topre requested the system to handle this dangerous work safely and efficiently.
AMADA PRESS SYSTEM incorporated an automatic coil band cutting system into the conventional auto threading function, and connected them to a control system to feed the coil material from the band cutting process to the press. In this system, the band binding the coil material is cut by the cutter mounted on the robot, and the collected band is automatically put into the scrap box.

Nowadays, many HTSS are used in the body of the car as usual, but in this interview, we found out that there was a great deal of struggle and effort from Topre. We are deeply impressed and glad to hear the valuable stories such as, while having aggressively proposed the use of high tensile materials to car manufacturers, having explained the problems in press forming, precautions in design, problems in the welding process, etc. and then, having repeatedly made prototypes and experiments over and over again and passed the inspection of an automobile manufacturer with the great efforts and finally joined the collision experiment. We would like to thank Mr. Yukawa and Mr. Ishii for sharing your valuable time. AMADA PRESS SYSTEM shall continue to strive to meet the needs of Topre. 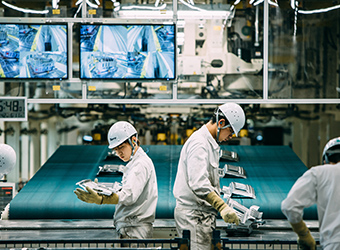 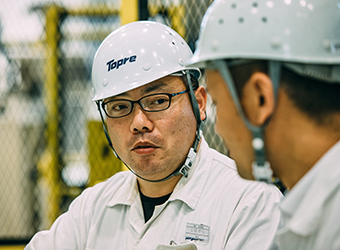 Contact for repair/recovery of AMADA PRESS SYSTEM products and our corporate activities.